In the past week, Facebook has finally begun to take notice of the activity of the Crossroad Junction Page run by Jim Wright and to which only Jim Wright and his wife are known to post.  Two posts have been removed from the Crossroad Junction Facebook Page over the past week for Community Guideline Violations in response to complaints filed under the categories of “Hate Speech” and “Harassment.”

First, Jim Wright responded in apparent anger when he discovered that Bart Breen (the webmaster for this page) had “dared” to send private messages to people with whom he shared common friends warning them of Wright’s history of excommunication from a previous local church and then subsequently by a consortium of more than 35 Organic Church leaders.

For good measure, after posting a “warning” to others advocating that the followers on his page construe any and all communication from Bart as unwelcome and harassing he then followed with a comment which attributed Bart’s behavior to a recognized disability and made a strong inference which a reasonable person would construe as an assessment of mental illness.  Jim Wright claims in his public blogs to be a counselor along with his wife under the practice of Theophostic Counseling as well as a retired Attorney, the Director of Fulcrum Ministries under which he acts as the sole spokesman for Nathan’s Voice, Crossroad Junction, and he also has been involved with former organizations which include but are not limited to Fulcrum Express and Fulcrum Forum.

Facebook very quickly, (in less than 8 hours) then removed the entire post under their Community Guidelines in response to the complaint of “Hate Speech.”This wasn’t enough for Wright however.  After being called upon to apologize for this behavior unbecoming a self-proclaimed “Public Figure,” Attorney, Organic Church Sower (!?), Counselor (!?!?) and Church Elder (!?!?!?) he then posted again a longer “warning” calling upon people to report Bart Breen for exercising his freedom to contact people with whom he shared common connections and widening his accusations to “Harassment” of other people who like and comment on his page.

Thankfully, Facebook once again moved quickly to delete this mean spirited and unwarranted personal attack under it’s Community Guidelines, this time in response to a complaint for “Harassment.”

Jim Wright has been involved from as early as 2007 in an incessant public campaign against his previous two local churches, one of which excommunicated him for bringing forth a variety of trumped up charges of financial impropriety and has since expanded using the internet to seeking attention for himself by targeting National Authors with whom he disagrees on doctrinal and Church Polity and Organizational Issues.  He commonly makes accusations of sexual abuse using Nathan’s Voice and then parroting the charges from Crossroad Junction to give the appearance of independence and separation.  Like his former behavior with his local churches he uses the tactic of public attacks while attempting to hide his own past church disciplinary issues.  Jim has also been banned from multiple Facebook Pages, Communities and Groups as well as Blogs for similar behavior and intemperate use of personal attacks and highly offensive and judgmental speech.  This is by no means the first of these types of occurrences.  These latest issues simply highlight the lack of judgement and conscience that Jim Wright apparently has as he continues his pattern of presenting a public persona online and then translating it to attacks on those against whom he bears personal malice and toward whom he engages in personal vendetta’s. 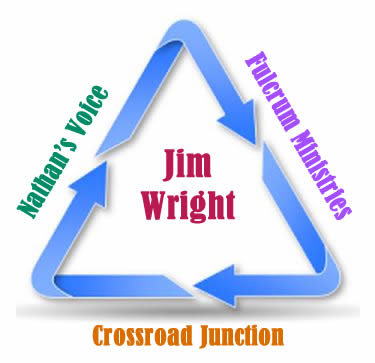 A public call has been made and is being repeated here for the Elders, Board Members, Church Members and any associated with Mr Wright to the extent that these claimed groups and churches actually exist, to address Mr. Wright’s representation of them in the local and internet community.  It’s hard to believe that activity that has been sustained for this long a period publicly in their name would not draw their attention and a public statement either removing or disassociating themselves from Mr. Wright.  Absent that it’s not unreasonable to believe that no such functional organizations exist and that Mr. Wright is using these hidden organizations to cloak his own activities.  At this time, there is no known way to contact any of these claimed organization other then through Mr. Wright who obviously bears a conflict of interest and refuses to name any others involved or to provide other means of contact.

Please use caution in approaching, communicating or engaging with Mr. Wright, but should you find this behavior directed toward you particularly on Facebook, remember that Facebook has standards even if Jim Wright and Crossroad Junction, Nathan’s Voice, Fulcrum Ministries, do not.