It’s been a long time coming.

Facebook Suspended Jim and Marianne Wright’s Crossroad Junction page on March 5, 2015.  As of March 19, 2015 the page has not returned. In general, any page missing for more than 2 weeks is a good indication that it’s been permanently deleted. Jim and Marianne Wright using various identities as Fulcrum Ministries, Crossroad Junction, Nathan’s Voice and Fulcrum Express (and this is not an exhaustive list) have been pumping a steady stream of misinformation, innuendo, gossip and outright slander toward multiple people for over 2 years.  The past few weeks have seen even more ridiculous and shriller charges of stalking, cult leadership and actively promoting sexual abuse and defending sexual abusers directed at the author of this blog who stood up to this activity and behavior and dared to point out their aberrant and bizarre behavior.  It culminated with a desperate attempt to try and appeal to a page population by over 6,000 people, most of whom never participated actively, and were from 3rd world countries, to start a campaign of harassment toward the author of this blog as well.  In addition, Jim Wright also began taking his slanderous personal attacks and actually paying to make them sponsored advertised pages in other people’s feeds.  When you can’t get attention based on your own merit and reputation, I guess you have to pay for it.

Facebook removed several of these individual charges and posts from Crossroad Junction’s Facebook Page over time but this morning, several notices were received from Facebook indicating that Crossroad Junction’s page had been removed.  Further, it was clear from these notices that this was based on a decision by Facebook and not by the Wrights.  I only point this out, because in the past, Jim Wright in particular has attempted to diminish such events by claiming that it was his choice rather than an action by others. 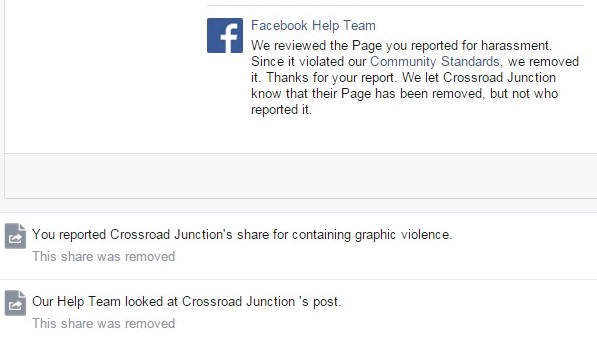 While such an action by Facebook may be temporary, awaiting some sort of response to them by the Wrights giving them assurance that they will cease their persistent violation of community guidelines, this should be a clear indication to anyone who comes in contact with the Wrights or their bogus multiple organizations that Facebook, which actually tolerates a great deal, has had enough of Crossroad Junction and their methods.  They appear to have shut them down permanently.

Of course, the blog site which has no oversight except for the Wrights themselves, continues to preserve these slanderous, yellow-dog journalistic type of gossip columns.  Facebook however, has over time now, seen the behavior and dealt with the complaints coming from multiple people and shut Crossroad Junction down.

Because Crossroad Junction and Wright’s other sites continue to operate and utilize other social media outlets (like Twitter and Google+) to continue to spread the Wrights’ lies, smears, and exaggerations, this blog and the corresponding Facebook Page will remain active. If and when the Wrights finally do the right thing and cease their slander, these two sites will be removed.

In the meantime, if you observe Crossroad Junction or any of the other myriad identities created by the Wrights operating in this manner please know that while it may take time, you can report them for violations of Terms of Service or Community Guidelines in whatever mediums they are attempting to spread their poison.  It may take time, but over time, it will and does eventually catch up with them.

Pray for the Wrights

This site is not established on the same basis as Crossroad Junction.  For the past 2 plus years it has responded to lies and disinformation when it is spread.  It has researched through the internet, newspaper archives, court records and personal interviews to determine what has been going on for so many years particularly with Jim Wright and since 2010 with his wife Marianne who lends her name to his activities.  It is regretful that this has had to take place in public, but that decision is a direct result of the public accusations of this couple toward multiple people in prior churches and relationships with them.  Ultimately, it’s the hope of this blog author that they will wake up to the reality of what they are doing and cease and even go back to the wreckage of so many prior relationships and experience healing and forgiveness.

Until these churlish and irrational outbursts are removed however, regretfully, this blog and other avenues must remain to counter their lies, misrepresentations and open attempts to harm others with their online bullying tactics.