False allegations of abuse are themselves a form of abuse.

Any person or organization that brings forth charges of abuse and campaigns on the basis of those allegations must themselves be held to the very highest standards of professional and personal integrity.

Signs that the abuse of false or exaggerated claims is occurring can include:

1. The claim of an organization that has no public board or internal structure for accountability. Beware of lone wolfs who hide their sources and do not have board members with public credentials and in effect ask you to simply trust them with no evidence that they are themselves trustworthy.

2. Claims being presented by a spokesperson who has personal involvement in the situation or who has previous contact with the accused who could be reasonably be accused of a conflict of interest or a personal vendetta. Reputable Professionals and Organizations recognize where conflicts of interest exist and will take strong measures to avoid them by recusing anyone with any appearance of a conflict from both public or private involvement.

3. When an organization makes public accusations only against those with whom there is personal involvement of the leaders and claims other involvements with no proof, that makes the organization even more suspect and less likely to be legitimate.  Talk is cheap.  A legitimate organization with legitimate involvement can provide evidence that doesn’t put others at risk.

Nathan’s Voice, Crossroad Junction, Fulcrum Ministries and Jim Wright thus far fail on all these counts and have refused to address these issues despite being called on them for several months and asked to disclose Board Members and Elders.  Nobody other than Jim Wright speaks.  Many of Jim Wright’s claims are not verified other than by repeated or additional unsubstantiated claims as to involvement in other situations.

Organizations and individuals who use accusations of abuse without minimum levels of professional and public disclosure and accountability are as likely to be instruments of abuse and have histories of Organizational Conflicts such as excommunication, public defamation campaigns, exaggerated and grandiose claims of self-importance, a history of domestic and family conflict with abusive behaviors and professional behavior that creates and discards multiple organizations in an effort to hide their activities and prevent public exposure of issues, the hiding of assets to protect against liability or judgement in personal or organizational legal matters or any number of other issues that such abuse of organizations are commonly used.

People of legitimate organizations and victims of legitimate abuse themselves are often attracted to such public voices because they feel validated and they do not do their own due diligence and investigation to make sure that the voices they lend their own credibility to are themselves legitimate.

Legitimate organizations and Victims need to exercise extreme care in promoting and lending their names to False Advocates or they risk losing their own credibility and diminishing the voices of others who have legitimate concerns and causes.

It’s not enough to hide behind the seriousness of the cause or the accusations. There must be complete integrity of those speaking and bringing charges publicly or the cause itself suffers. 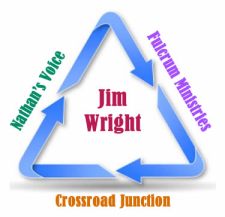 Nathan’s Voice, Crossroad Junction, Fulcrum Ministries and Jim Wright have many issues which they have been called upon and no-one representing these claimed organizations other than Jim Wright has come forward and in most cases has remained silent.

Beware of repeating the claims and promoting this activity lest you destroy your own credibility and have to answer publicly for what you have done. That’s not a threat toward anyone. Such support however will have to be accounted for and recanted and consider now what that will do to you or your organization if you’re allowing your passion for the issue to cloud your better judgement in endorsing someone who cannot or will not provide the evidence that indicates they are legitimate and have people involved with them who are credentialed and credible in this area.

Don’t allow your own past history of abuse or concern for it to make you an instrument of abuse yourself.

One thought on “False Claims of Abuse are Themselves Abuse”