Why Jim Wright Has Issues with Sovereign Grace Ministries

This is the continuation of a series started HERE.

If there’s one thing I’ve learned about Jim and Marianne Wright, Crossroad Junction, Nathan’s Voice, Fulcrum Ministries, Fulcrum Express and Fulcrum Forum, or whatever name de jour Jim Wright tries to re-identify himself as, it is that if Jim Wright has an issue with someone or some organization, that will be the basis of his taking aim and attacking with a whole litany of personal and ridiculous accusations.  This has included his last two institutional Churches in Manassas, VA which he left in the midst of conflict with Church leadership and charges of sexual impropriety, and in the case of the second church was actually formally excommunicated following another litany of incredibly ridiculous charges of financial impropriety.

Another organization that Jim Wright attacks regularly is Sovereign Grace Ministries which I thought must have been because it was in the local news in Northern Virginia and Maryland and was a convenient target because it does have some legitimate issues of sexual abuse in the past.  Jim Wright loves to cite stories in the news or of court issues related to Sovereign Grace Ministries (SGM) and then with no real basis for comparison to then cite whomever else he’s trying to attack in the same breath as if there’s some real connection there.

As is usually the case, there is a connection with SGM in Jim Wright’s world, but it’s with Jim Wright himself and he appears desperate to distance himself from it.  Future articles may take a look at some psychological issues connected with a practice known as “gas-lighting,” of which this is a prime example, but in this instance the connections to Jim Wright were pretty easy to find and, of course, desperately covered up by Jim Wright as he seeks to redefine himself away from his real historical roots.

Sovereign Grace Ministries was founded in the 1970s by CJ Mahaney in the Maryland area when it was known as People of Destiny International (PDI), and it was very similar in many ways with the New Covenant Churches of Maryland of which Jim Wright’s father, Robert R. Wright, was the president.  In particular, just like the New Covenant Churches of Maryland, Sovereign Grace Ministries was closely associated with the Shepherding Movement.  There’s a good overall history of the movement available HERE on Wiki, but it’s easily Googled elsewhere too.  Note in particular, this information:

In some ways, you could almost compare the New Covenant Churches and what would become Sovereign Grace Ministries, as different forms of a religious “Amway” pyramiding organization.  They were independent of one another and indeed in one sense, competitors against one another for similar types of “believers” who were willing to be put into their hierarchy and submission networks.

The New Covenant Church of Arnold MD, was founded by Robert R. Wright.  There were also following, a number of “home fellowships” started in the Arnold and Davidsonville are that tied into the New Covenant Church association of which Robert R Wright was the President and which according to newspaper articles in the Annapolis Capitol and Gazette became at times as large as more than 30 churches spread over Maryland.

Now more than 35 years later, Jim Wright is attempting to reinvent himself and his past as having been part of a “grassroots” organic church movement. Nothing could be further from the truth however.  Rather than moving away from Institutional Church, these “home fellowship groups” were woven into the very fabric of New Covenant Churches, and rather than moving away from Institutional Church, Robert R. Wright and Mary Jane Wright, relocated later to Texas where they continued to work to plant an Institutional Church.  That’s a rather odd thing for organic church planters to do, don’t you think?

When they returned in the late 2000’s to Virginia and began to live with their son Jim while he was in the midst of a messy divorce from his first wife, Jim Wright had this to say about his parents and about his “ministry.” 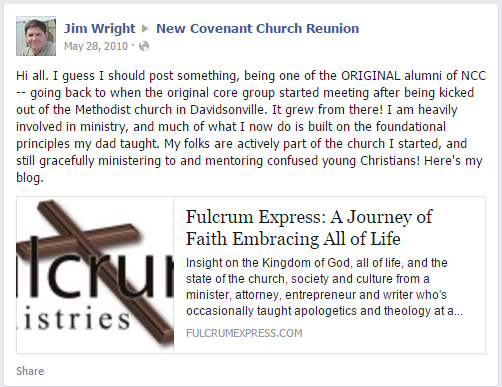 Jim Wright’s “Organic Church” Ministry as he represented it in 2010.

Anyone familiar in the least with Organic Church would see an announcement like this promoting one’s “Ministry” and taking the title of “Minister” as  the total opposite of “Organic Church” by any measure. But if that were not enough, then there’s this as well.

You know who now has closer ties to Sovereign Grace Ministry Churches than any of them? Jim Wright, that’s who.  Observe the following announcement HERE from Sovereign Grace Ministries announcing the replanting of the New Covenant Church in Arnold, MD which was founded originally by Robert R. Wright, Jim Wright’s father.  Note as well the involvement of some home fellowships in the Arnold and Davidsonville area that look remarkably like the home fellowships that Jim Wright claims were prototypes of Organic Church which now are a part of this Institutional Church replant by Sovereign Grace Ministries as well.  They’re even currently working to change the name to CrossPointe Church now.

I’m quite certain, based on what I know and have observed of Jim Wright, that this is a development that he’s not happy about.  It obviously calls into question his whole delusional narrative about his parents being Organic Church pioneers.  However, the fact remains, that the legacy of Jim Wright and his parents, now stands as a Sovereign Grace Ministries institutional church.

This completes the loop and shows in part why Jim Wright is so vehement and ardent too in his attacks upon Sovereign Grace Ministries.  Jim would have you believe it’s all about the defense of abuse victims.  As usual, however there’s a very deep and very personal connection to Jim Wright that adds an element of personal vendetta and personal grudge. In the end, everything comes back to and centers around Jim Wright and his reputation and image and how he wants to appear to others.  The more Jim Wright rails against a person or organization, it appears a safe bet that just a little investigation will reveal that there’s some personal motive at work that Jim Wright attempts to portray as something else.

Future posts will continue to document the history of newspaper articles that show the bizarre patterns from past years of Jim Wright and the similar network of organizations centered around Robert R. Wright to what Jim Wright is attempting to recreate for himself recently.

The Next Article in this Series which features an article from the Annapolis Capitol showing how Jim Wright and the Family Protection Lobby attempted to stack the deck in an election, is HERE.